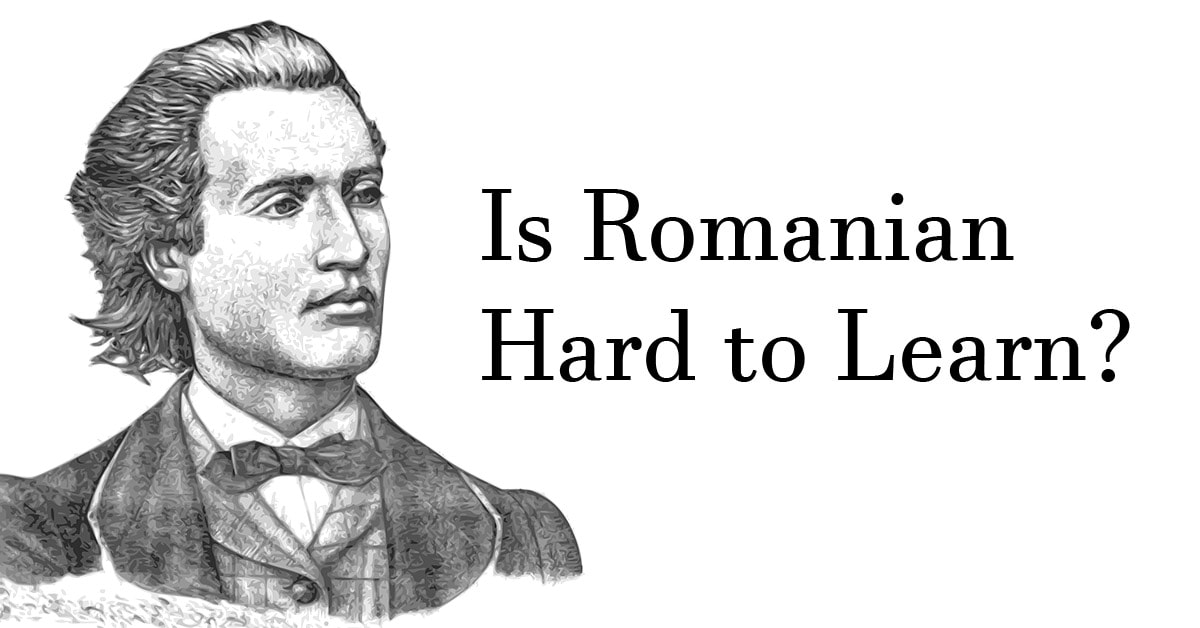 I have been studying Romanian for over eight years and I’ve been fluent for nearly six years. Becoming fluent in Romanian has been a challenge, but I’ve found the experience of mastering a foreign language highly rewarding.

If you’re considering taking up Romanian, then you may be wondering how hard it is to learn.

In my experience, Romanian is not a hard language to learn. Since Romanian is a Latin language, it shares many similarities with Spanish, Italian, and even English.

While it has grammatical quirks not shared by other Latin languages, it is generally a much easier language to master than Russian, Chinese, or Arabic.

In this guide, I will go over some of the quirks of the Romanian language that may present a challenge to those who are learning it for the first time. Then, I will give the main reasons why I consider Romanian an easy language to learn.

I’ll offer my thoughts on the overall difficulty of the language and how much time you’ll need to dedicate to learning it before gaining fluency.

As you read, keep in mind that this guide is based on my experience as a native English speaker. Before learning Romanian, I had only ever studied French, which I studied for three years in high school.

Depending on your own native language, and whether this is your first time learning a foreign language, you may have a different experience.

Why It’s Hard to Learn Romanian

For many, the most challenging aspect of the Romanian language is its grammar. While much of Romanian grammar is similar to languages like Spanish and Italian, there are a few differences that make it uniquely difficult.

In particular, Romanian grammar is unique because it employs a system of cases. Cases exist in languages like Russian and Polish, but they aren’t extensively used in Spanish, French, Italian, English, or Portuguese.

Cases involve the changing of a noun’s form depending on the noun’s relation to the verb. For example, the word for man in Romanian is “om.” To say “I told the man,” however, you must use a different form of the word man, since it is the indirect object of an action. In our example, you would say “i-am spus omului.”

Notice how the word “om” takes on the new form, “omului,” when the man is the indirect recipient of action (to tell/a spune).

Cases introduce a layer of complexity to Romanian since verbs and nouns have many possible forms. In order to speak correctly, you must learn these forms and how to apply them. If your native language lacks a case system, then you may find this aspect of Romanian confusing and difficult.

On a relative basis, Romanian is a widely spoken language. It is spoken by 24-26 million people worldwide, making it the 50th most common native language in the world. It has more native speakers than Dutch, Tagalog, or Greek.

Despite all of this, you may not find many opportunities to use Romanian outside of Romania. Unlike Spanish and Italian, there are few people who endeavor to study Romanian. You aren’t likely to come across meet ups or social groups devoted to people who speak Romanian.

In addition, most young Romanians are conversant in English. While this may seem like a good thing, it makes it difficult to practice your Romanian while visiting Romania.

In my own experience, I found the first six months of practicing Romanian especially difficult because many Romanians preferred to use English in our conversations. While this was convenient at times, it also stunted my progress in Romanian.

Since then, I’ve discovered many tools that make it easier to find language partners who can provide you with Romanian practice. One tool in particular, italki, has been instrumental to my journey to fluency in Romanian.

Since Romanian isn’t a widely studied language, there aren’t many resources for students of this language. Unlike French, which is the topic of countless YouTube channels and podcasts, the ecosystem for Romanian learners is severely underdeveloped.

As a consequence, you may find it difficult to find suitable learning materials at the beginning of your journey. The few grammar books that exist for Romanian tend to be esoteric and unfriendly for beginners.

To my knowledge, there aren’t any resources like “News in Slow French” or “Italiano Automatico” for the Romanian language.

To combat this challenge, you may have to get creative with your strategy for consuming content in Romanian. For starters, you could find children’s shows and books in Romanian. When I was starting out, I read the entire Diary of a Whimpy Kid series to familiarize myself with colloquial Romanian.

Like any language, Romanian sounds different in the various parts of the world where it is spoken.

For example, Romanians in Transylvania are notorious for speaking slowly and with a distinctive ardelenesc accent. Farther west, in the border towns of Oradea and Cluj Napoca, it’s common to hear Hungarian words mixed in with the language.

On the other side of the country, in the Moldova region, people speak in a distinctly Slavic-influenced dialect.

Although Romanian’s vocabulary is primarily Latin, it also has elements of Slavic and Greek. This is due to the country’s closeness to the Orthodox church, which used Old Slavonic for many centuries. In fact, Romanian was written using Cyrillic characters until recently, when it adopted a Latin alphabet.

For example, the Latin-derived word for watermelon in Romanian is “pepene verde.” In the eastern region of Moldova, however, you would hear the word “harbuz” used, instead. This word is obviously derivative of the Russian word for watermelon, arbuz.

I remember the first time I visited Iasi, a city in the country’s Moldova region. Despite having studied Romanian for months in Bucharest, I was shocked to find that I could not understand a word that was being said. The accent was so thick that it took me nearly a month to adjust my ears and finally understand the Graiul Moldovenesc being spoken all around me.

If you’re planning on visiting different regions of Romania, then you may be surprised by the variety that exists between dialects and accents. For beginners, this can be a difficult stumbling block in becoming fluent.

Why Romanian is Easy to Learn

Now that we’ve covered some of the challenges of learning Romanian, let’s discover some of the reasons Romanian is an easy language to learn. Here are three reasons why Romanian isn’t as challenging to learn as other languages.

My favorite thing about the Romanian language is that it is written and pronounced with extreme consistency. Unlike in English or French, in Romanian each letter only makes one sound. In other words, once you have learned the alphabet in Romanian, you can accurately pronounce every word in the language.

This is a huge advantage because you don’t have to spend time guessing how a word is pronounced. In addition, it makes it easy to look up words you don’t understand. Just by hearing someone pronounce a word, you can instantly ascertain how the word is written and write it down or look it up in a dictionary.

The highly phonetic nature of the Romanian language means that, like Spanish or Italian, it is very easy to write and read.

Although English is technically a Germanic language, much of our vocabulary stems from Latin. Following the Norman Conquest of the British Isles in the 11th century AD, French was exclusively used in the courts and administrative institutions of the British Isles.

As a result of the Norman Conquest, English absorbed many French and Latin words and incorporated them in its vocabulary. For example, the following are Latin-derived words commonly used in English:

If your native language is English, then you unknowingly use many words borrowed from Latin. Since Romanian is a Latin language, you will instantly recognize many commonly used Romanian words.

In fact, most English words ending in the suffix -ion can be easily translated to Romanian by replacing the -ion ending with -ție. Here are several examples:

When I was in college, I decided to enroll in Russian 101. While I thoroughly enjoyed the course, I felt like the hardest part of learning Russian was learning its Cyrillic alphabet. Since I am a visual learner, I had a hard time committing new words to memory because I couldn’t visualize what they looked like in my head.

Even as my understanding of Russian grammar has progressed, I still feel like I am hindered by the challenge of memorizing things in a new alphabet.

Luckily, you won’t encounter this problem with Romanian. Since Romanian uses a Latin alphabet, most of the letters in the language will be familiar to you. S still makes an s sound, f still makes an f sound, and so on.

With few exceptions, you should be able to pick up the Romanian alphabet and begin reading from the start. If you’re interested, here are the new letters you’ll need to learn in Romanian:

How Long Does It Take to Learn Romanian?

If you remain dedicated, you can reach a conversational level of Romanian in as little as 4 months. Of course, if Romanian is not the first foreign language you’ve learned, then you can become conversational in much less time.

Since much of Romanian’s vocabulary, pronunciation, and grammar are shared with similar languages like Spanish and Italian, knowing one of those languages can make learning Romanian dramatically easier.

If you already know a Latin language, you can reach a conversational level of Romanian in as little as two months.

Reaching complete fluency, on the other hand, is an ongoing process that will probably take at least a year, regardless of your knowledge of other languages.

While you’re sure to encounter challenges as you learn this one-of-a-kind Romance language, I can assure you it’s worth it. Learning a language that few people in the world learn is exciting and very rewarding. Romanians will be impressed with your effort to learn their culture and many opportunities will be opened to you.

If you found this article helpful, then check out my free guide on the best way to learn Romanian. In the guide, I’ve compiled some of my favorite free resources for Romanian Learners.

link to Autumn in Poland: 10 Reasons to Visit

Poland is a low-key travel destination in central Europe. It's known for being cheap, under-the-radar, and beautiful. Here are 10 reasons I think autumn is the ideal time to check out...

Continue Reading
link to Why is Polish So Hard to Learn?

Here are the main reasons Polish is so difficult to learn, in order of significance: It's extremely difficult to understand spoken Polish Grammatical cases with complex declension...

I'm Jake and I've been travelling Europe for the past decade. I have a particular interest in Central and Eastern European languages and cultures.

I want to provide you with a glimpse of the Europe you aren't likely to see plastered across Instagram--the Europe of quiet, charming, and rapidly shrinking villages, of authentic and unknown cultures, of mountain people and storytellers, and of once-great communist paradises.

Above all, I hope to show you somewhere old but unseen; and a place untraveled.